Please welcome my special guest, romantic suspense author Kaylin McFarren. I recently had the chance to read and review her latest novel, Severed Threads, and I have to say it is an entertaining, thrilling read. Kaylin was generous enough to take time out of her busy schedule to answer my questions about her book and her writing. I hope you’ll enjoy the interview!

A native of California, Kaylin McFarren has traveled around the world and is now settled in Oregon.

As the director of a fine art gallery, she assisted in developing the careers of numerous visual artists who under her guidance gained recognition through promotional opportunities and in national publications. Eager to unleash and develop her own creativity, she has since channeled her energy toward writing novels. As a result, she has earned more than a dozen literary awards and was a 2008 finalist in the prestigious RWA® Golden Heart contest. She is a member of RWA, Rose City Romance Writers, and Willamette Writers.

Thanks for this interview, Kaylin! Do you consider yourself a born writer?

Definitely. Since the age of eight, I’ve loved to write stories and have been filled with an active imagination.

What compelled you to start writing professionally?

Like many authors, I was originally inspired to write my first novel after reading a great book and seeing an amazing movie. Mine happened to be Memoirs of a Geisha and The Notebook, which will always be my favourites.

Severed Threads is full of romance, suspense and danger. What was the most challenging aspect of writing this romantic thriller?

The most difficult task to writing a suspense story is to keep the action moving while revealing character traits and emotions along the way. Severed Threads contains an array of characters and each serve their purpose in revealing a twisting and turning plot that ultimately leads to a pleasant resolve. However, keeping the voices of each person unique also proved to be a challenge.

Tell us something about your hero and heroine that my readers won’t be able to resist.

Chase Cohen is a handsome, womanizing, thrill-seeking treasure hunter who has found his greatest challenge and true love in Rachel Lyons. But she doesn’t trust Chase for good reasons and won’t be easy to win over.no matter how hard he tries.

What did you find most fascinating while researching underwater archaeology and ancient Chinese treasures?

I had no idea how much gold had been lost at sea. According to Greg Stemm, co-founder and co-chairman of Odyssey, there’s billions of dollars scattered beneath the ocean. However, much of the ocean floor is unexplored and unmapped and global imaging shows crushing depths ranging up to six miles. And there could even be gold or diamond mines that far surpass what anyone on earth could imagine. Since trade included priceless collectibles and dishware from China as well as gold and silver, these were lost along with ships that sank during storms and battles hundreds of years ago and many will never be recovered.at least not in our lifetime.

How long did it take you to write the novel and did you work from an outline?

It took me close to two years to write Severed Threads. This included the time needed to research details and edit my final manuscript. I typically create a synopsis and then write by the seat of my pants. I’m not big on storyboards and planning, as I’m too anxious to get my stories on paper.

Although I tend to edit as I go, I eventually asked three published authors and two experienced readers to assist with my initial editing before hiring a professional editor to review my manuscript. After taking all of their advice into consideration, I fine-tuned my writing and sent it in for publication, hoping I’d done my best in creating a fast-paced, entertaining tale.

What advice would you give to first-time novelists who are just starting to market their books?

Spend a little extra time in researching your options. If you chose to approach a publishing house, be sure the agents you contact are experienced in your genre and have a great track record. If you decide to self-publish, be prepared to spend a little extra money and time in promoting your titles as well as yourself.

What’s on the horizon for Kaylin McFarren?

I’m currently completing the second book in the Threads series – Buried Threads – and will be following this with a third – Banished Threads. I’ve enjoyed my characters so much in my first installment that I decided to take them on adventures around the world and have been urged to do so by readers who follow my stories.

Keep reading and if you enjoy the work created by an author, be sure to let them know. Your praise and support encourages every author to write!

Find out more about Severed Threads on Amazon.

View the original article on blogcritics.org 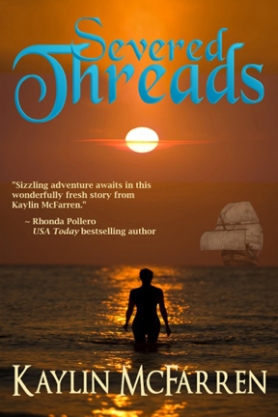 The story opens during a diving salvage operation with experienced divers and treasure hunters Sam Lyons and Chase Cohen. Though they’re working on the Griffith wreckage, Sam believes the site also contains the wreckage of none other than the Wanli II—the Ming Dynasty Emperor’s lost dragon ship containing an ancient figure head, a fierce dragon in gold leaf and preserved in resin for all posterity—the gift Mai Le intended for her lover.

Unexpectedly, however, things turn bad for Sam while he’s underwater: he suffers cardiac arrest for no apparent reason. Indeed, the circumstances surrounding his death appear more than a little mysterious.

Chase, who had loved him like a father, feels responsible and doesn’t know what to make of it. Did something malfunction or did something scare Sam down there? He’d been an experienced diver with over 20 years of experience under his belt. What had Chase missed? Sam was the only man Chase had allowed himself to trust. He and his daughter Rachel were the only two people he really cared for. But now all had changed: Sam was dead, and Rachel would forever blame him for his death.

Move four years forward. Rachel Lyons, Sam’s Daughter, is working at a grant foundation. All is pretty quiet and routine in her life…until she’s approached by a museum director asking for a grant to conduct another diving salvage operation, run by none other than Chase’s Trident Ventures.

Though Rachel has no intention of helping Chase, Chase is set on convincing her. Since the operation focuses on discovering the Wanli II, if they succeed, her father would receive his long overdue reward and the museum would fund a permanent exhibition to honor his memory.

Yet, Rachel is still hesitant. Then, a twist of fate puts Rachel’s brother in danger, forcing her to change her mind about funding Chase’s project.  Chase is more than suspicious about her sudden change of heart, but he isn’t about to say no to this opportunity which could help him leave his mark upon the world as a renowned treasure hunter.

Thus, she grants him the money and insists on joining the underwater expedition. Can she put aside pride and work with Chase on a daily basis?

Severed Threads is an engaging, entertaining read! I’ve always enjoyed stories about lost treasures and underwater archaeology and this one didn’t disappoint. The hero and heroine are realistic and sympathetic and there’s a sizzling chemistry between them. The plot is believable with a fair share of exciting twists and turns. I found the workings of a grant foundation and a diving salvage operation quite interesting and informative. Pacing is fairly quick with a nice balance of action, dialogue, description and the inner thoughts of the characters.

In short, Severed Threads is an exciting novel featuring danger in the high seas, romance, action and adventure, murder, and even a sprinkle of the paranormal for good measure. Recommended.

By thedarkphantom in author interviews, Fiction, Romantic Suspense, Suspense, Women's Fiction on November 28, 2012.
← YA Fantasy Author Richard Blunt on Virtual Book Tour Guest Post On the Elements of a Short Story by John Paul Jaramillo, author of The House of Order →