Home » author interviews » Interview with Melodie Campbell: ‘You need to love the actual act of writing’

Interview with Melodie Campbell: ‘You need to love the actual act of writing’

Billed as Canada’s “Queen of Comedy” by the Toronto Sun (Jan. 5, 2014), Melodie Campbell achieved a personal best when Library Digest compared her to Janet Evanovich.

Winner of nine awards, including the 2014 Derringer (US) and the 2014 Arthur Ellis (Canada) for The Goddaughter’s Revenge (Orca Books), Melodie has over 200 publications, including 100 comedy credits, 40 short stories, and seven novels.

Melodie got her start writing stand-up. In 1999, she opened the Canadian Humour Conference. Her fiction has been described by industry reviewers as “hilarious” and “laugh-out-loud funny.”

Melodie has a commerce degree from Queen’s University, but it didn’t take well. She has been a bank manager, college instructor, marketing director, comedy writer and possibly the worst runway model ever. These days, Melodie is the Executive Director of Crime Writers of Canada.

Her latest book is the paranormal romance time travel, Rowena and the Viking Warlord.

Q: Welcome to Beyond the Books, Melodie.  Can we start out by telling us whether you are published for the first time or are you multi-published?

I think this is publication number 200!  I have over 100 comedy credits, 40 short stories, and seven novels.  ROWENA AND THE VIKING WARLORD is lucky number seven. 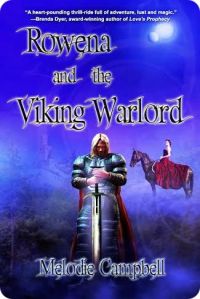 Guess I should preface that by saying I won my first writing award in 1989.  I’ve been making up stories since I was 4.  My parents called it lying.  That was so short-sighted of them.

For my first novel, I went small press.  I’d been a professional writer for 15 years (comedy, standup and short stories) so I was used to working with publishing industry editors and enjoyed the relationship.

ROWENA AND THE VIKING WARLORD is with Imajin Books, my first publisher.  They are terrific, and I’m delighted to still be with them.

About 5 months, which is pretty quick in the book trade!

It was wonderful to have a novel published!  I think I stared at the paperback for an hour.

But how did I celebrate?  (Okay, get ready for it…)  I bought a 1994 white Corvette convertible!  (They don’t call my humor column ‘Bad Girl’ for nothing!)

I know.  Totally irresponsible.  And me, with two kids. This spring, with my two book advances, I traded it in for a 2006 sapphire blue Corvette convertible.  (The car, not the kids.)

I’ve been married for decades, so I can’t celebrate with fast men.  So I make it fast cars, instead.  Even my husband likes that <grin>.  No wonder he wants me to write more!

I went on a blog tour, just like this one.  I love reaching readers in this way.  It seems personal.

How much I would enjoy interacting with readers.  I’ve made some wonderful friends over the past five years, and they have encouraged me to write more and more.

When I first started in this business, it was all about sales.  Then I thought the winning of awards was the apex (I have nine.)

Then a fan wrote to say that ROWENA THROUGH THE WALL (book 1 of this trilogy) was the best book she had ever read.  I actually cried.  I’ve won 9 awards.  None of them can match that moment. I write for her now, and readers like her.

To be successful as an author, you need to love the actual act of writing.  That being, hands on keyboard, butt in chair, isolating yourself for hours on end as you create stories on paper.  If you love that, you will continue to write, and will get better and better at it. And you WILL get published!

By admin in author interviews on August 25, 2014.
← Interview with Paul DeBlassie: ‘Religion can be both terrifying and damaging’ Interview with Tara Edin: ‘There comes a time when being authentic is more beneficial than being flawless’ →