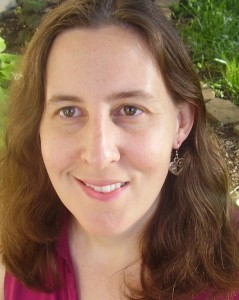 “Writing has taught me the importance of self-confidence in becoming good at anything,” says Christine Amsden, who, in spite of having been diagnosed with Stargardt’s Disease, a condition that effects the retina and causes a loss of central vision, has gone on to become the award-winning, bestselling author of the Cassie Scot: ParaNormal Detective fantasy/mystery series published by Twilight Times Books.

“My parents encouraged reading a LOT,” says this speculative fiction writer, who grew up gobbling up The Chronicles of Narnia, The Baby Sitter’s Club, andFlowers in the Attic. “I know they read to me too, but I was an advanced reader at an early age and preferred to read on my own when I could. I have memories of staring at picture books, making up stories about the pictures though I couldn’t understand the words.” At the tender age of 8, she wrote her first short story, about Cabbage Patch Dolls going to Mars. From then on, she wrote fairly consistently until 2003, which marked the beginning of her professional career when she attended a workshop with Orson Scott Card.

Amsden may be legally blind, but she hasn’t allowed that part of her life to stop her from becoming a prolific author, and nowadays she splits her time between writing, freelance editing, and coaching — with a keen focus on writing. She loves to write about real people defining themselves through extraordinary situations, giving special attention to people and relationships, her way of making science fiction and fantasy meaningful for everyone. “I will continue to marry romance with speculative fiction because I simply love both genres,” states the author. “I love a good character story. I think character is more important than just about anything else, and a great character will have me reading any genre at all and loving it. I get a lot of people telling me that they like my books even though they ‘don’t normally read stuff like that.’ I think it’s because of the characters.”

In what she describes as her messy, cluttered desk, and with a special arm attached to her monitor to help her eyes and back, Amsden creates her stories rich in characterization and world building. Her latest book, Madison’s Song, a companion to her Cassie Scot series, is about a shy young woman who has suffered more than her fair share of betrayal in the past. A friend of Cassie (the only ungifted daughter of powerful sorcerers), Madison now gets a chance to prove that she can be more than a plump, shy sidekick. When her brother’s life is in danger, she faces her greatest fear with head held high to save him. The story is equally about Scott, a werewolf who has fallen in love with a woman he doesn’t believe he deserves.

Amsden’s writing style is straightforward and conversational, which is probably why most readers and reviewers describe her work as highly entertaining and fast paced. “I’m not the sort to hide the story behind flowery prose,” she says. “I like the words to get out of the way of the story.” She’s a fast writer as well, finishing the rough draft of the book in only two months, though she then put it aside for a year before revising it, a process that took her five additional months. Her writing process, though fluid, is different with each book. “My best story ideas are the ones that come to me while I’m doing something else, although this doesn’t excuse me from putting in my hours of conscious effort. No two projects that I’ve worked on have developed in exactly the same way, either. I like to try new strategies, mix things up, so life doesn’t get boring.”

Like the Cassie Scot series, Madison’s Song will also be available in audiobook format, which is how Amsden “reads” most books these days. “It was important to me, when I became an author, to make my books available to listen to as well as read, and not just for others with disabilities. Audiobooks are a terrific way to enjoy books for busy people whose reading time can be combined with a daily commute, or with housework.”

Like most authors, Amsden loves sharing her creative ideas with the world, something which can be understandably challenging. “Nothing is universally liked,” states the author. “I try not to read negative comments or reviews, but it’s almost impossible to avoid all of it. When someone ‘gets me’ I feel an almost euphoric connectedness to the world; when someone doesn’t, (in a really big way), it almost makes me feel isolated.”

The definition of success varies from writer to writer. For Amsden, it has changed since she started writing. “At one time (not too long ago), I had an unrealistic expectation of success that involved becoming a bestseller and making an upper-class living off of my books,” she confesses. “When the Cassie Scot series came out, I sold thousands of books but still didn’t make the kind of money that would let me ‘earn a living’ off of it. It made me rethink my definition of success, because

by all measurable standards my books are doing well – I’ve got great reviews, I’ve won several awards, I’ve sold many thousands of books, and I’m making money. I feel most successful when I connect with readers who love my books. So maybe that’s what success is. I’d love to connect with more readers, sell more books, and make more money, but I’m becoming satisfied with who and what I am now. (Like Cassie.)”

At the moment, the author is waiting for her next book, Kaitlin’s Tale, to be released by Twilight Times Books. She’s also hard at work on a new series set in a completely different world and with a new cast of characters. Though it’s way too early to say much about it, readers can count on it being filled with romance and the paranormal.

A native of St. Louis, Christine Amsden now lives in Olathe, Kansas with her husband, Austin, who has been her biggest fan and the key to her success, and their two beautiful children.

Connect with Christine Amsden on the web: