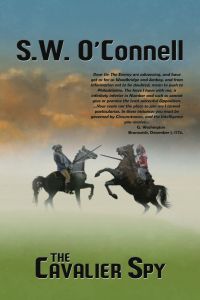 Thank you so for this interview, Lieutenant Creed.  Now that the book has been written, do you feel you were fairly portrayed or would you like to set anything straight with your readers?

Truth be told, I was somewhat uncomfortable with the fact that the author did not fully reveal why I came to America. Or rather, the reason I was in prison before I, ahem, escaped to this fair land. I am sure he had his reasons. Perhaps he wants to reveal them in a future book in the Yankee Doodle Spies series. But having this hanging over my head like a cloud of musket smoke is a bit disarming. As to my overall character, he may have painted me as a bit too mercenary. He has me taking certain sums of money on two occasions.  I am an idealist by nature. I just believe money is a means to an end. And I believe I put it to good use – supporting the cause of the American independence from an oppressive King.

Oh, I should say he did a foin job at that. I am light hearted on the exterior and a bit reflective on the inside. I believe I am more spiritual than the author portrayed. But I do indeed thrive on humor. ‘Tis something that helps me through the darker moments such as leaving home at a tender age, losing loved ones and having to flee more than one country and fight a secret war on behalf of my adopted land. Why, ‘tis a wonder he didn’t have me spewing oaths that would make a pirate blush. I guess he didn’t want me to displease my mum.

Well, I mentioned humor. But also, the ability to turn serious when it comes to getting a job done.  After all, I serve His Excellency George Washington – the essential man of the age. And The Cavalier Spy takes place during the times “that try men’s souls.” Failure is not an option… neither for General Washington, nor me.

I eat too fast. Really. And the lads, that is my men, the White Knights, roll their eyes at my fastidious hygiene. I guess in that sense I am ahead of my time. My peers would say my humor. I enjoy bantering with Abner Scovel. He’s such a dour New Englander.

As we don’t have such things in the eighteenth century you pose me an anachronistic question. But…Hmmm… I’d say a young Colin Farrell or Hugh Jackman. Or perhaps a younger version Daniel Day Lewis. But if you read the Cavalier Spy, you will see that I can be a bit of an actor myself.

In matters of the heart I try to stay discreet. But without naming names – yes. She is the most beautiful woman in 13 independent states. Daughter of a British surgeon. But she is a true patriot.

Unfortunately, we are separated by time and space. You see, she lives with her dad in British occupied New York and I am with General Washington in New Jersey.

When I failed in my initial mission and did not find (or save) Nathan Hale in British occupied New York. And the mayhem of occupied New York had me wondering. But for me, the worst was the intense grilling of His Excellency and Colonel Fitzgerald as they tried to “vett” me. Admitting to a secret past is often difficult. But made all the more so by the fact my chief inquisitor, General George Washington himself, was the most important man in the world.

Roy Harry, of course. He is sort of my alter ego. My evil twin, so to speak. Although at heart, he’s merely a rogue.

Other than horrendous weather in the Jerseys and missing Christmas mass, I am overjoyed with the outcome. But something tells me my joy will not be long lasting.

I’d like to spend a lot more time in British occupied New York! But something tells me he has other plans first.

Thank you for this interview, Lieutenant Creed.  Will we be seeing more of you in the future?

‘Tis my fondest wish… and in the past as well. The Cavalier Spy is, after all, book two in the series. Book one is The Patriot Spy… 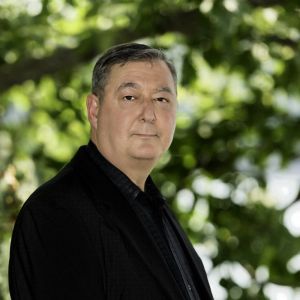 S.W. O’Connell is the author of the Yankee Doodle Spies series of action and espionage novels set during the American Revolutionary War. The author is a retired Army officer with over twenty years of experience in a variety of intelligence-related assignments around the world. He is long time student of history and lover of the historical novel genre. So it was no surprise that he turned to that genre when he decided to write back in 2009. He lives in Virginia.

1776: His army clinging to New York by a thread, a desperate General George Washington sends Lieutenant Jeremiah Creed behind British lines once more. But even the audacity of Creed and his band of spies cannot stop the British juggernaut from driving the Americans from New York, and chasing them across New Jersey in a blitzkrieg fashion. Realizing the imminent loss of one of the new nation’s most important states to the enemy, Washington sends Creed into the war-torn Hackensack Valley. His mission: recruit and train a gang of rogues to work behind British lines.

However, his mission takes a strange twist when the British high command plots to kidnap a senior American officer and a mysterious young woman comes between Creed and his plans. The British drive Washington’s army across the Delaware. The new nation faces its darkest moment. But Washington plans a surprise return led by young Creed, who must strike into hostile land so that Washington can rally his army for an audacious gamble that could win, or lose, the war.

“Secret meetings, skirmishes and scorching battles… The Cavalier Spy takes the reader through America’s darkest times and greatest triumphs thanks to its powerful array of fictional and historical characters… this book shows that courage, leadership and audacity are the key elements in war…”

~ F. William Smullen, Director of National Security Studies at Syracuse University’s Maxwell School and Author of Ways and Means for Managing UP

By thedarkphantom in Historical Fiction on September 12, 2015.
← A Tale of Three Settings: The Story Behind ‘The Cavalier Spy,’ by S.W. O’Connell First Chapter Reveal: Stop the Diet, I Want to Get Off + Win $100 Amazon Gift Card! →