While growing up, David H. Reiss was that weird kid with his nose in a book and his head in the clouds. He was the table-top role-playing game geek, the comic-book nerd, the story-teller and dreamer.

Fortunately, he hasn’t changed much.

David is a software engineer by trade and a long-time sci-fi and fantasy devotee by passion, and he lives in Silicon Valley with his partner of twenty-six years. Until recently, he also shared his life with a disturbingly spoiled cat named Freya.

(Farewell, little huntress. You were loved. You are missed.)

David’s first book, Fid’s Crusade, has just recently been published; this was his first novel-length project, but it certainly won’t be his last—he’s having far too much fun!

Consumed by grief, rage, and self-loathing, a brilliant inventor rebuilt himself to take on a new identity: the powered-armor-wearing supervillain, Doctor Fid. For twenty violent years, Fid has continued his quest to punish 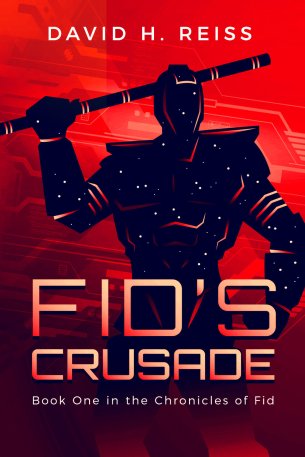 heroes who he considers to be unworthy of their accolades, and the Doctor has left a long trail of blood and misery in his wake. After a personal tragedy, however, Doctor Fid investigates a crime and uncovers a conspiracy so terrible that even he is taken aback.

Haunted by painful memories and profound guilt, the veteran supervillain must risk everything to save the world that he once sought to terrorize. Every battle takes its toll…but the stakes are too high for retreat to be an option.

In the end, it may take a villain to save the entire Earth from those entrusted with the Earth’s protection.

“Fid’s Crusade by David H. Reiss is one of the most refreshing and lively takes on the superhero genre I’ve seen in years. His title character’s crusade is colorful, compelling, and takes wonderfully unexpected turns, and the novel delivers an impressive emotional punch (to go along with the super-powered ones). It stands easily alongside other character-driven superhero novels like Austin Grossman’s Soon I Will Be Invincible, Carrie Vaughn’s After the Golden Age, and Paul Tobin’s Prepare to Die!.” – Hugo award-winning author Tim Pratt

Q: Welcome to Beyond the Books, David.  Can we start out by telling us whether you are published for the first time or are you multi-published?

I’ve been writing for most of my life, but Fid’s Crusade was my first published novel; I’ve since published two more books in the series.

I originally intended to go the mainstream traditional publishing route and had begun the process of seeking representation from a literary agent, but I eventually decided to self-publish instead.

There were several reasons for that choice. For one thing, I’d come to realize that my novel was within a sub-genre that didn’t seem to be getting much attention from the Big Five publishers. For another…I wanted to have printed copies of the novel in time for my Grandmother’s 100th birthday.

Self-publishing is very quick; it only took a few days once I decided that I had all my files in order.

It felt simply extraordinary. Getting my first box of paperbacks delivered in the mail was a dream come true.

If I recall correctly, my housemates and I celebrated by going out for a stupidly expensive steak dinner.

I don’t regret my decision to self-publish, but I often lament the fact that I didn’t have a clear marketing strategy in mind before I started. I flailed about and didn’t really learn my way around advertising for quite a while.

One thing that I *did* do early on was to enter my novel in contests that accepted self-published works. Fid’s Crusade ended up being the winner in the “Science Fiction / Fantasy / Horror” category of the 2018 Publishers Weekly BookLife Prize and was finalist under consideration for the annual grand prize.

Q: Since you’ve been published, how have you grown as a writer and now a published author?

I’m always learning, both in improving my craft as a writer and in slowly learning how to market my works effectively as a self-published author. Getting feedback from my readers has helped me recognize my strengths and to identify aspects of my writing style that I need to work on.

I learned a lot from writing Fid’s Crusade and am proud that I’ve been able to take those lessons and move forward with new projects.

It seems remarkably naïve in retrospect, but I have to admit that I didn’t have the slightest clue as to the amount of effort that would be needed in order to market and advertise my novel effectively.  I’d had this image in my head that I would simply release my book into the wild and readers would stampede forward to read it.

That isn’t quite the way that it worked out. But I’m learning.

One thing that has amazed me is the remarkable communities of self-published authors that are dedicated towards helping each other succeed. I’ve found facebook groups that teach marketing strategies, resources to find beta readers, etc. It’s simply wonderful how many tremendously successful authors have turned around and tried to share the secrets of their success with their peers.

I love getting feedback from my readers. There is nothing quite like the knowledge that I was able to entertain a stranger, that I was able to touch their emotions and inspire them to dream with nothing more than words on a page.

Having fans is the most rewarding thing about being a published author.

Read a lot. Write a lot. And learn to cherish critics who are willing to tear your writing apart; you’ll learn more from one person who hates your work (and is willing to tell you why) than you will from a thousand people who love it. 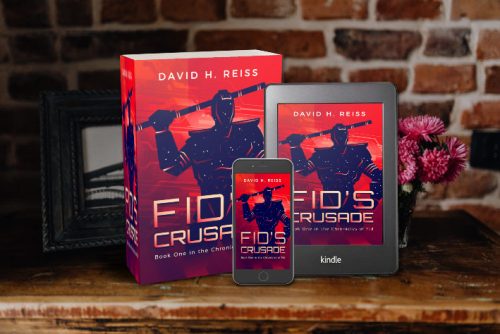 By admin in author interviews on June 12, 2019.
← Interview: Geoff Armstrong, Author of Moments That Made America Review: It’s Time to Start Living with Passion! My Journey to Self Discovery, by Jean Paul Paulynice →