We’re thrilled to have here today Amy Benson from Ray East and Sam D’s new YA fantasy romance, Voluspa: A Magical World. Amy is a 15-year-old empath from New York.

It is a pleasure to have her with us today at Beyond the Books!

Thank you so for this interview, Amy. Now that the book has been written, do you feel you were fairly portrayed or would you like to set anything straight with your readers?

I think my character has been portrayed fairly well. However there is this small thing that I’d like to clarify. In the book I am portrayed as someone with an aversion to shopping. In truth I love shopping and hanging out in the mall.

I think the author did a good job of capturing all the nuances of my character. My insecurities, moments of self-doubt, my needs to find affection and all my other traits have been accurately presented.

I would say my perseverance. Life has always thrown me a few hard curves but I never give up. My friends tell me that I am just plain stubborn.

I am very emotional. I think and feel very strongly.

Yes. His name is Drake Mc Grizzle and he is the most amazing boyfriend a girl could ever wish for.

I didn’t really get nervous about the outcome of the book because I had faith in my authors.  To be honest, I have to admit that there is one part in the book, where I start feeling an attraction of sorts for a very disagreeable boy. That had me worried. Besides I was so engrossed in Drake, I found it hard to genuinely understand my attraction for another boy.

I would hate to be Lord Vali. He has no redeeming quality and is just plain evil.He is cruel, greedy, ambitious, blood thirsty and completely merciless. In short, he is despicable. But I also think he is pitiable. His evilness stems from the turns and twists his life has taken – to some extent he is a product of difficult circumstances as well as possessing a natural proclivity towards violence.

I think the ending of the book is pretty great. If you have connected with the young lovers i.e. me and Drake then the ending is going to fill you with anticipation. You’ll be eager to know what happens next.

I would just ask the author to keep in mind all the things that have changed about me in the past several months. I am no longer the same person that I was when I first arrived in Voluspa. My trials and triumphs have caused me t change. I am so much stronger as a person; more confident. Also finding Drake, falling in love with him has changed me. Now I am at peace with the person I am.

Thank you for this interview, Amy.  Will we be seeing more of you in the future?

Absolutely! The adventure is nowhere near done. I want my happily ever after with Drake.

Ray East and Sam D has moved to Voluspa and live in the Forest of Skotos with their 5 year old daughter and a pet Typhon.  They visit Earth with the help of an Empath from time to time. Ray East did her masters in Phsychology from Univeristy of Sussex and has worked as a counselor for adolescents. Sam D used to teach at a SPJC before he moved to Voluspa.

Their latest book is Voluspa: A Magical World.

To get your e-copy of VOLUSPA: A MAGICAL WORLD by Sam D & Ray East for your Kindle at Amazon: http://www.amazon.com/Voluspa-A-Magical-World-ebook/dp/B008BCZBTE/ref=tmm_kin_title_0

To learn more about Sam D and Ray East, visit their website: www.magicalworldofvoluspa.com 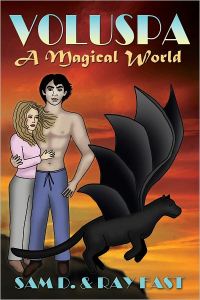 Centuries ago, war between aliens and humans almost destroyed the world. To prevent such a war from happening again, a mighty ruler then formed a secret society of nine powerful humans and aliens called the Bramhas. These Bramhas each wrote a book imparting ancient wisdom and knowledge. The possession of these books could bring about untold power and success. The nine books were hidden but the desire to possess those books, still cause men to fight wars and turn against each other. One such war was fought in the realm of Voluspa decades back; the consequences of that war still resonate in this magical land. Two young lovers get caught in this tussle and it changes their destinies forever.

Amy’s humdrum life takes a complete 180’ turn with the death of her stepfather. She goes to live with her grandmother – her only living relative, though she hasn’t seen her in the last five years. Among her mother’s childhood memorabilia, she finds a book ‘Legends of Voluspa’ that captures her imagination. She becomes so engrossed in the book that she starts dreaming  about the places in the book till one night she finds herself inexplicably transported to the new world – Voluspa, as described in the book. Here she meets Drake, who unknown to her is a shape shifter.  Chemistry cackles between the two from the very first and as they discover that they share a lot in common, a tenuous bond forms between the two. ‘I’ll keep you safe’ vows Drake and he remains true to his word as he befriends her and saves her from various troubles that befall her over the next couple of months.

In Voluspa, Amy discovers a new way of life. It’s a magical world inhabited by primarily four clans – Empaths, Morphus, Mendens and the Pulchrous. The Empaths have the power of mind, the Morphus are the shape shifters, Mendens are the healers while the Pulchrous possess physical perfection and strength. With the help of an old family friend, Amy takes her rightful place in the Empath clan. This marks a new chapter in Amy’s life. She realizes her own powers and subsequently starts going to a school to enhance the same. With Drake by her side, she makes some wonderful friends. However, her life is not all smooth sailing; trouble comes when she learns the truth about her biological parents. She realizes that her very existence is against Voluspan law which forbids the union between individuals belonging to two different clans. History threatens to repeat itself as she realizes that her predicament was not that different from what her mother had faced, decades back. She is totally in love with Drake, who belongs to the Morphus clan.

The enchanting world of Voluspa is far from Utopic; it has barely recovered from a devastating war fought twenty years back when the peace of the land is once again threatened by Gangrels, the evil army of aliens.  The two young lovers soon realize that besides contending with forbidden love, they have to deal with other impediments. Ancient enmities, a past war, a much coveted book, all conspire against the two lovers. Gangrels reappear in Voluspa and Drake falls in the clutches of one such evil being who would stop at nothing to realize his fiendish ambitions. Amy and her friends cross realms, face enemies, deal with challenges, solve riddles and brave possible destruction, as they set off on an adventure to rescue Drake.  The ‘Force of Sutra’ clashes with the ‘Elemental Force’ of the Gangrels as Amy and her friends are faced with an indomitable enemy. They use strategic warfare, pit adversaries among themselves and use every last drop of strength, skill and courage as they take on warriors far more ruthless and skilled than themselves.

As Amy embarks upon a quest to save Drake, her love for him is tested at every turn but she never wavers from her objective. Braving imminent death she manages to reach Drake – only to find a changed person. Gone is the man she is in love with, instead a dangerous stranger stood in his place. This Drake was teetering at the edge between becoming completely evil and retaining his own soul. He almost harms Amy but stops himself at the very last minute. His love for Amy proves to be stronger than the evil entity threatening to overpower him.  However when chips are down, Drake comes through. He sets aside his personal well-being in order to save Amy, one last time. Drake is perhaps lost forever but hope dies last – Amy is determined to get back Drake, no matter what the cost.